Liporedux Pro For ( CLA-Carnitine e Forscolina extract 97% of the active principle) represents the ultimate goal in the field of shaping cosmetics. Fighting the cellulite inesthetisms with effectiveness.
It improves skin metabolism, fluid drainings and local blood microcirculation. The molecule’s behaviour effects inside the fat cell, rebalancing its disfunctions, returning its regular activities .
Liporedux Pro For belongs to the so-called “chemio-receptive cosmetology”, meaning that the used ingredients directly act into the body’s biochemicals receptors.
CLA-CARNITINE is a patented molecula form natural source, it stimulates and enhances the use of fats, thus favouring greater metabolism of lipid substrata, and subsequently reduces them.
Considering the structure and powerful biological activity of this new molecula, the expected qualitative properties are markedly higher than those of the two components taken individually, results are clinically tested:
• substantial body fat reduction and lean mass development;
• an increase in metabolic efficiency for the use of high-energy molecules (lipids);
• an increased chance of burning fats during physical exercise;
• an increase in the efficiency with which sugars are burnt;
• a direct increase in the activity of the enzymes involved in cellular breathing (more rapid energy production);
• fewer free radicals formed during physical exercise.
FORSKOLIN it is extracted from the root of Coleus forskohlii, an important plant of the Indian Ayurvedic tradition, with a special extraction process (FROM GMP PLANT) that allows a never reached, maximum purity level: 97% of the active principle.
FORSKOLIN is a strongly efficacious active ingredients: performing a very effective lipolytic action (50 times stronger than Caffeine), involve an antagonistic action to the lipogenesis (avoid fat re-accumulation), effecting antioxidant action.

Efficacy test:
After 4 weeks of application every day, clinical evaluation of slimming an anticellulite inesthetisms effect compared with placebo in terms of emolliency, smoothness, elasticity, reduction of orange peel skin, silhouette appearance, decrease of compression pain, skin texture, give very good results:
• a more significant effect on cellulite in comparison to the placebo;
• a gradual increasing of Cellulite reduction during the treatment periods;
• no heart rate or blood pressure (were recorded during the study.), then a good tolerability of the product;
• no side effects on the skin were observed (local and systemic tolerability also if used for prolonged treatments and repeated cycles);
• both for men and women.

Results after 4 weeks of application: 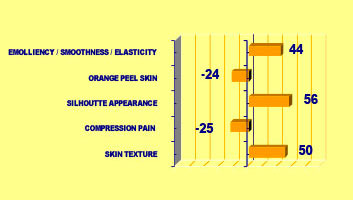